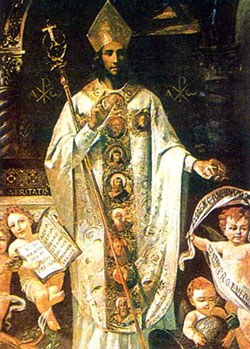 Bishop of Nola and writer. Pontius Meropius Anicius Paulinus was born to a wealthy Roman family at Bordeaux, in Gaul. His father was the praetorian prefect of Gaul who made certain that his son received a sound education. Paulinus studied rhetoric and poetry and learned from the famed poet Ausonius. He subsequently became a well known lawyer. He became the prefect of Rome, married a Spanish noble lady, Therasia, and led a luxury filled life. Following the death of his son a week after his birth in 390, Paulinus retreated from the world and came to be baptized a Christian by St. Delphinus in Aquitaine. With Therasia, he gave away their property and vast fortune to the poor and to the Church, and they pursued a life of deep austerity and mortifications. About 393, he was forcibly ordained a priest by the bishop of Barcelona. Soon after, he moved to an estate near the tomb of St. Nola near Naples, Italy There, he and his wife practiced rigorous asceticism and helped to establish a community of monks. To the consternation of his other relatives, he sold all of their estates in Gaul and gave the money to the poor. He also helped to build a church at Fondi, a basilica near the tomb of St. Felix, a hospital for travelers, and an aqueduct. Many of the poor and sick he brought into his own house, and he lived as a hermit with several of his friends. In 409, he was elected bishop of Nola, serving in this office with great distinction until his death. He was a friend and correspondent of virtually all of the leading figures of his era, including Sts. Augustine, Jerome, Ambrose, Martin of Tours, and Pope Anastasius I. Paulinus was also a gifted poet, earning the distinction of being one of the foremost Christian Latin poets of the Patristic period, an honor he shares with Prudentius. Paulinus retained much of the style of the old classical poets, and composed most of the poems in honor of the feast of St. Felix. He is the author of a body of extant works including fifty one letters, thirty two poems, and several prose pieces.