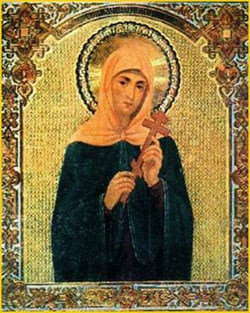 Martyr, whose shrine is venerated as a site of miracles. Agrippina is believed to have come from a good Roman family. She was caught up in the persecutions instituted by Emperor Valerian or Diocletian and was beheaded or scourged. Her body was taken to Mineo, Sicily, by three devout Christian women. The gravesite became a popular pilgrimage destination, noted for miracles through Agrippina's intercession.