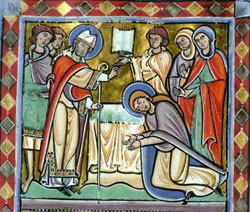 Frankish mayor of the palace, duke of Brabant, and the chief political figure during the reigns of the Frankish kings Clotaire II, Dagobert I, and Sigebert TI . The husband of Blessed Ita, he was a close ally of Bishop Arnulf of Metz with whom he overthrew Queen Brunhilda of Austrasia. He was soon appointed mayor of the palace for his role. Following an incident in which he reprimanded King Dagobert I for his adulterous life, he was exiled from the court and went into retirement near Aquitaine. Re called to serve as tutor to Dagobert's three year old son, Pepin once more became the chief figure of the king dom until his death. Pepin earned a reputation for defending the interests of the Church, promoting the spread of Christianity, and working to have only truly worthy bishops appointed to Frankish sees. While never canonized, he is listed as a saint in some old martyrologies. He was an ancestor of Charlemagne; his grandson, Pepin of Heristal, founded the Carolingian dynasty.