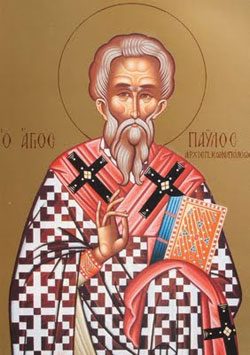 Bishop of Constantinople, during the period of bitter controversy in the Church over the Arian heresy. Elected in 336 to succeed Alexander of Constantinople, the following year he was exiled to Pontus by Emperor Constantius II. Because of his staunch position against Arianism, Paul was replaced by the heretical bishop Macedonius. Allowed to return in 338, Paul was again exiled by the Arians, who had the support of many in the imperial government, but returned about 340. Once more he was seized and, at the order of Emperor Constantius, he was exiled to Mesopotamia. Brought back in 344, he was sent yet again into exile, this time to Cucusus, inArmenia. Here he was deliberately starved and finally strangled by Arian supporters. He is considered a martyr for the orthodox cause and was a close friend St. Athanasius.