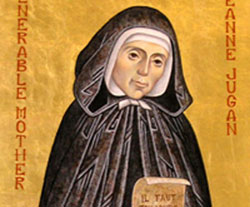 St. Jeanne Jugan, also known as Sister Mary of the Cross, L.S.P. was born on October 25, 1792 in the French region of Brittany during the French Revolution.

Jeanne grew up as the sixth of eight children to Joseph and Marie Jugan surrounded by a lot of religious and political upheavals. Her father became lost at sea when Jeanne was just four-years-old, and her mother struggled to provide for all the Jugan children.

Her mother worked diligently to make sure her children had everything they needed, including secret religious instruction when anti-Catholic persecutions were taking place.

From a young age, Jeanne learned to knit and spin wool and became a shepherdess. Barely able to read or write, Jeanne took a job as a kitchen maid for a noble family when she was 16.

Jeanne accompanied the Viscountess de la Choue when she visited the poor and the sick. As she matured, Jeanne began finding her passion in working with these people and turned down multiple marriage proposals. She told her mother God had other plans for her.

At 25, Jeanne became an Associate of the Congregation of Jesus and Mary, which was founded by St. John Eudes. She spent her time praying and working as a nurse in the town hospital. She stayed at the hospital for many years until her own health issues prevented her from performing her physically demanding tasks.

After leaving her job at the hospital, Jeanne became the servant of a member of the Eudist Third Order for 12 years. While working as a servant, Jeanne and her master found the same Catholic faith in each other and set out to begin teaching catechism to the town's children and caring for the poor.

In 1837, Jeanna and Francoise Aubert rented part of a small cottage and were joined by a 17-year-old orphan, Virgine Tredaniel. Together, they formed a small community of prayer devoted to helping the poor and teaching the catechism.

Two years later, Jeanne was approached by an elderly, blind and partially paralyzed woman named Anne Chauvin. With no one there for the woman, Jeanne carried her to her apartment and took it upon herself to begin caring for her. She let Anne have her bed and Jeanne slept in the attic.

A short time later, Jeanne took in two more old women in need of help and by 1841, she rented another space to house a dozen of elderly people. The next year, she attained an open convent and housed 40 more people.

With approval from her peers, Jeanne began focusing her attention on her new mission - assisting abandoned elderly women. This marked the beginning of the religious congregation known now as The Little Sisters of the Poor.

Jeanne constructed a simple Rule of Life for her new community of women. Each day they went around town requesting food, clothing and money for those in their care. Jeanne's carried on with her new life's work for the next four decades of her life.

More young women started to hear about Jeanne's mission and joined her. Through begging on the streets, Jeanne was able to open four more homes for her needy within those 10 years. By 1850, over 100 women had joined the congregation.

Jeanne was soon forced out of the leadership role, though. The local bishop appointed Abbe Auguste Le Pailleur as Superior General of the congregation. Jeanne was assigned to strictly begging on the streets until she was sent to retire in a life of obscurity for her final 27 years of life.

After The Little Sisters of the Poor communities began expanding throughout France, their work spread to England in 1851 and the United States founded five of their own communities from 1866 to 1871.

By 1879, Jeanne's community had over 2,400 Little Sisters. On March 1, 1879, Pope Leo XIII approved the Constitution for the congregation for seven years.

At the time of Jeanne's death, on August 29, 1879, most of the Little Sisters had no idea Jeanne was the real founder of the congregation. However, Le Pailleur was investigated and dismissed in 1890 and Jeanne became acknowledged once again as the foundress.

During her canonization Pope Benedict XVI expressed, "In the Beatitudes, Jeanne Jugan found the source of the spirit of hospitality and fraternal love, founded on unlimited trust in Providence, which illuminated her whole life."

She is the patron saint of the destitute elderly and her feast day is celebrated on August 30.