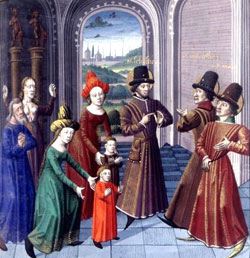 Roman martyrs, twin brothers and deacons. From a distinguished family, they lived in Rome with their wives and children. Arrested, the brothers refused to sacrifice to the Roman gods and were arrested. They converted their guards and escaped but were soon recaptured. Both died in Rome. Their basilica in the catacombs of St. Balbina was discovered in 1902. Their cult was confined to local calendars in 1969.