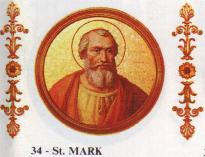 Pope, successor to St. Sylvester I , elected January 18, 336. He was the son of Priscus and a priest of Rome. During his pontificate he erected two basilicas on land donated by Emperor Constantine I. He died in Rome on October 7 after only eight months. His cult is now confined to local calendars.