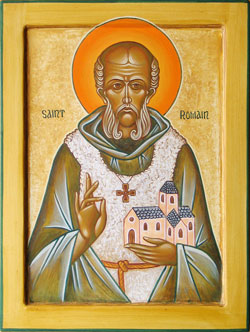 Abbot of Gallo Roman descent, he adopted the life of a hermit in the Jura Mountains, France, at age thirty five and was joined by his brother, St. Lupicinus, and many other disciples. The two brothers thus found it necessary to establish two monasteries, at Condat and Leuconne, and a convent at La Beaume which was governed by their sister. Romanus was famed for his healing of two lepers at Saint Maurice. He died on February 28 and was buried at La Beaume.