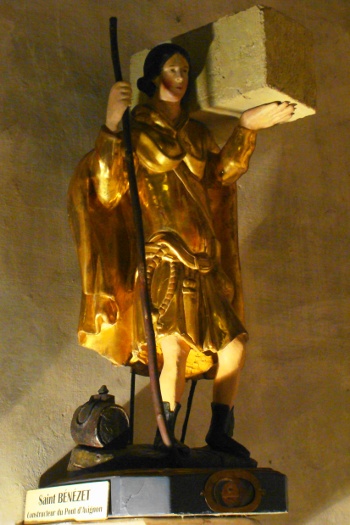 Saint Benezet lived between 1163 and 1184, and is known primarily for being the founder of the tradition of the bridge building brotherhood. His icons frequently depict him as a shepherd boy carrying a stone.

According to legend, Benezet was a shepherd who experienced a vision while watching an eclipse of the sun. In his vision, he was instructed to build a bridge over the river Rhone at Avignon. Concerned about his flock, he was told that angels would provide watch while he worked. Thus assured, he started to build the bridge, working alone.

At first, the civil and religious authorities refused to help him.

Onlookers watched as the young shepherd boy carried a stone that was much too large for a man to lift. He placed the stone and proclaimed that it would become the foundation, to which onlookers declared his feat of strength to be a miracle. As he continued working on the project, additional miracles occurred including inexplicable healings of the deaf and blind and restorations of those crippled by disease to health.

The miracles convinced many that Benezet's work was ordered by God and they finally came to his aid, pledging funds and help. Thus, the first Bridge Brotherhood was formed.

Bridge brotherhoods would be among the most important developments of the medieval period with many forming across Europe. The brotherhoods were intended to be temporary and dedicated to building bridges in areas that needed them. Some people too vows while they worked on the projects, knights donated funds, and entire communities lent support in various forms. Several famous bridges were built by brotherhoods, including the bridge across the Rhone at Avignon.

These projects were important to the development of trade, which served as a precursor to the renaissance in Europe.

Benezet himself died in 1184, just 21 years old, two years before his bridge was completed. He was interred in the bridge in a tiny chapel dedicated to Saint Nicholas, the patron saint of mariners. His body remained there until a flood in 1669 washed out a portion of the bridge and his coffin along with it. His casket was recovered and opened, where it was found that his body was entirely uncorrupted.

Benezet was recognized as a saint in the 13th century.

He was reburied in the cathedral at Avignon and later the Celestine church of Saint Dider.

The bridge, of which the arches still stand, is a pilgrimage site even to this day.