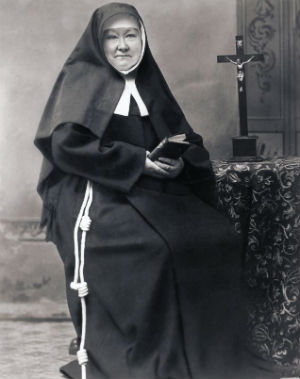 Blessed Aline Bonzel was born in Olpe, Germany on September 17, 1830 to a wealthy and influential family. Her father died while she was young, leaving her mother to raise little Aline. Fortunately, her mother was a very faithful and devoted woman who saw that Aline received a proper upbringing in the Church.

Aline took to Church like with alacrity and soon discerned that she was being called to a religious life.

Despite her mother's strong faith, she initially resisted Aline's desire to join a religious community. Aline would not enter religious life until age 29, delayed by her mother's disapproval and health problems.

Aline formed a religious community with two of her friends. She took the name Maria Theresa. The tiny community concentrated their efforts at providing nursing. Unfortunately, this placed them at odds with another established community that also provided nursing.

Maria Theresa also desired to use the Franciscan rule for her order, contrary to the dominant Augustinian rule. The friction gained the attention of Church authorities who recognized the two orders as separate with Sister Maria Theresa recognized as the superior of the new community. In 1863, the community was formalized as the Sisters of St. Francis of Perpetual Adoration.

Mother Maria Theresa was very dedicated to the cause of the poor and the outcast. She believed strongly in following the example of Christ as described in the Gospels. With this devotion, it was necessary for her to properly establish her order along with a Constitution and a style of dress. The community was founded as a Third Order Franciscan Congregation, which it remains today. They also adopted a simple form of dress, which remained standard until 1960.

Mother Maria Theresa, in addition to caring for the sick, enjoined her community to caring for orphans. She was aided in her work by the wealthy families of Olpe, with whom she was well-connected. Her community grew slowly, joined by just two or three new sisters each year.

Despite help from wealthy families, her congregation remained poor, much by design, and it was by the Grace of God that they continued to grow and flourish. Schools of advanced education for girls were formed and many of these young women became nurses in new communities. Her order began to spread.

During the Franco-Prussian War, Maria Theresa and 20 of her sisters provided nursing to the soldiers. The Emperor awarded them medals.

Following the war, with the rise of Chancellor Bismarck, and unfounded fears that the Catholic minority in Germany could rise in opposition to protestant rule, government officials attempted to gain control of the Church. Part of their strategy was to seize Church property. To preserve their community, all property was put into Maria Theresa's maiden name, Aline Boznel. However, the restrictions they faced prevented the acceptance of new candidates--part of Bismarck's "Culture Fight." Their restrictions also prevented the practice of most of their ministry. This threatened the order with extinction.

To continue their work, Mother Maria Theresa sent seven sisters of the order to Lafayette, Indiana, where they could operate freely. The new community served as nurses and taught the children of German immigrants to the United States.

Mother Maria Theresa considered transplanting the entire community to the U.S., but by 1880 Bismarck's Culture Fight had come to an end with the arrival of a new pope who was willing to negotiate with the powerful chancellor. Unified, peaceful Catholic resistance to Bismarck also helped.

With persecution of the Church ended, the community in Germany grew rapidly. Likewise, the American order also grew rapidly.

As Mother Maria Theresa grew older, she also became weary. She expressed a desire to no longer be elected as superior of her order, but time and again, she was overwhelmingly elected. Even whens he was near death in 1904, she was reelected as general superior.

She finally gained rest in 1905 when she passed away after a long illness.

In 2010, the Church proclaimed her "venerable." In November 2013, following documentation of a miracle in Colorado Springs, Colorado, she was scheduled to be beatified by Pope Francis.