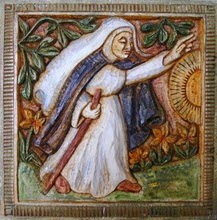 Blessed Margaret of Citta-di-Castello, Virgin It must have been about the year 1293 when some women of Citta-di-Castello in Umbria, who had gone one day to pray in their parish church, found within, a destitute blind child of about six or seven, who had been abandoned there by her parents. The kind souls were filled with pity for the little waif, and, poor though they were, they took charge of her-first one family and then another, sheltering and feeding her until she became practically the adopted child of the village. One and all declared that, far from being a burden, little Margaret brought a blessing upon those who befriended her. Some years later, the nuns of a local convent offered her a home. The girl rejoiced at the prospect of living with religious, but her joy was short-lived. The community was lax and worldly; Margaret's fervor was a tacit reproach to them, nor did she bring them the profit they had anticipated. Neglect was succeeded by petty persecution, and then by active calumny. Finally she was driven forth ignominiously to face the world once more.

However, her old friends rallied around her. One couple offered her a settled home, which became her permanent residence. At the age of fifteen, Margaret received the habit of a tertiary from the Dominican fathers, who had lately established themselves in Citta-di-Castello, and thence forth, she lived a life entirely devoted to God. More than ever did God's benediction rest upon her. She cured another tertiary of an affliction of the eyes which had baffled medical skill, and her mantle extinguished a fire which had broken out in her foster parents' house. In her desire to show her gratitude to the people of Citta-di-Castello, she undertook to look after the children while their parents were at work. Her little school prospered wonderfully, for she understood children, being very simple herself. She set them little tasks which she helped them to perform; she instructed them in their duty to God and to man, instilling into them her own great devotion to the sacred Childhood, and she taught them the psalms which, inspite of her blindness, she had learned by heart at the convent. We are told that when at prayer she was frequently raised a foot or more from the ground, remaining thus for a long time. Thus she lived, practically unknown outside her own neighborhood, until the age of thirty-three, when she died amidst the friends who loved her, and was buried by their wish in the parish church, where many remarkable miracles took place. The cult of Blessed Margaret was confirmed in 1609.