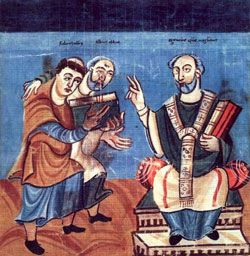 Abbot if Fulda, Germany, archbishop of Mainz and a well known theologian. Born in Mainz, he entered the Benedictine monastery of Fulda at an early age, receiving ordination as a deacon in 801. he then studied at Tours, France, under the famed scholar Blessed Alcuin and earned the Maurus in memory of St. Benedict's favorite pupil. Rabanus went back to Fulda into one of Christendom's great centers of learning , especially within the Frankish Empire. Ordained a priest in 814, Rabanus was elected abbot of Fulda in 822, and served until 842 when he retired, most likey under pressure from King Louis the German as relations between them were never cordial. Rabanus went into a life of seclusion and prayer at Petersburg until 847, when, after being reconciled with Louis, he received appointment as archbishop of Mainz. As archbishop, Rabanus was best known and beloved for his intense charity. He also promoted clerical discipline through several provincial synods, defended the rights of the Church, and clarified through the synods the doctrine of predestination. Considered one of the most learned men of his age.