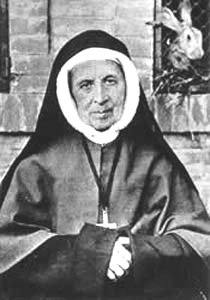 Foundress of the Society of Our lady of the Cenacle at La Louvesc, France. She was born on February 1, at Masle, France. Joining Father J. Terme in his parish work in Aps, she founded the Daughters of St. Regis, the original group that became the Society. She served as superior until 1838 and then resumed the role of a simple member of the com­munity until her death on September 26. By the time of her death, her congregation spread rapidly. Pope Paul VI canonized her in 1970.