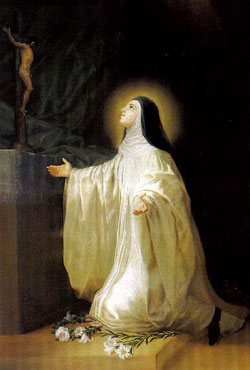 One of the outstanding mystics of the Middle Ages, a Cistercian nun, sometimes called Lutgardis. She was born inTongres, Brabant, Belgium. When she was twelve she was placed in St. Catherine's Benedictine Convent at Saint-Trond because her dowry for marriage had been lost by her family. A vision of Christ compelled Lutgard to become a Benedictine. She had many mystical experiences, levitated, and had a form of the stigmata. In order to avoid being made an abbess, Lutgard joined the Cistercians at Aywieres. She lived a mystical life there for three decades and was famed for her spiritual wisdom and miracles. During the last eleven years of her life she was blind. She died on June 16 and is still revered as a leading mystic of the thirteenth century.