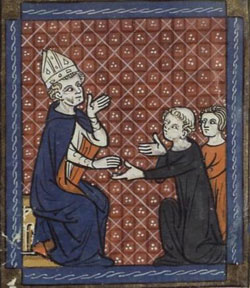 Bishop of Sens, France, succeeding St. Anthony in that see in 609. Lupus was slandered by a courtier, Farulf, and by an abbot, Medegislus, and was exiled. The Merovingian king Clotaire II realized that Lupus was the victim of slander. The people of the region also knew, and a mob killed Abbot Medegislus for his lies. Lupus returned to Sens. In some accounts he is called Leu.