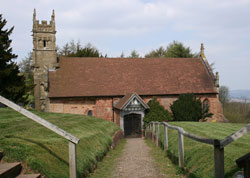 Martyred king of Mercia, England. Traditions states that he was the son of King Kenulf, who succeeded to the thrine at the age of seven. He was murdered by henchmen of his sister, Cynefrith. Another tradition states that his sister Quendreda bribed his tutopr to slay him. He is buried at Winchcombe Abbey, in Gloucestershire. Miracles took place there. Kenelm is now belived to have died before his father. He is mentioned in the Canterbury Tales.