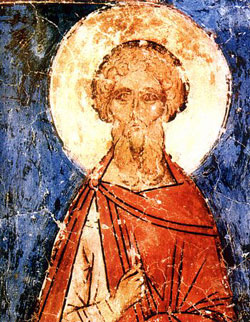 Martyr praised by St. John Chrysostom when his remains were enshrined in Antioch. He was born in Anazarbus, Cilicia, in modern Turkey, and was arrested as a Christian of senatorial rank. For a year Julian was put on display in cities all over Cilicia. He was then sewn into a sack filled with vipers and scorpions and hurled into the sea.