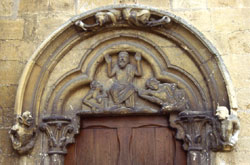 Benedictine abbot, sent as an ambassador to Caliph Abd al-Rahman III of Cordoba by Emperor Otto I. Born at Vandieres, France, he became a Benedictine at Gorze after renouncing his wealth and making a pilgrimage to Rome. After his two years in Cordoba, John was elected abbot of Gorze in 960.