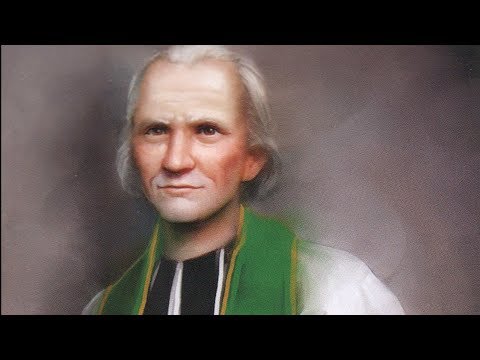 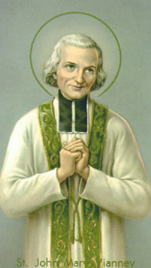 Jean-Baptiste-Marie Vianney, known as John in English, was born May 8, 1786 in Dardilly, France and was baptized the same day. He was the fourth of six children born to Matthieu and Marie Vianney.

John was raised in a Catholic home and the family often helped the poor and housed St. Benedict Joseph Labre when he made his pilgrimage to Rome.

In 1790, when the anticlerical Terror phase of the French Revolution forced priests to work in secrecy or face execution, young Vianney believed the priests were heroes.

He continued to believe in the bravery of priests and received his First Communion catechism instructions in private by two nuns who lost their convents to the Revolution.

At 13-years-old, John made his first communion and prepared for his confirmation in secrecy.

When he was 20-years-old, John was allowed to leave the family farm to learn at a "prsbytery-school" in Écully. There he learned math, history, geography and Latin.

As his education had been disrupted by the French Revolution, he struggled in his studies, particularly with Latin, but worked hard to learn.

In 1802, the Catholic Church was reestablished in France and religious freedom and peace spread throughout the country.

Unfortunately, in 1809, John was drafted into Napoleon Bonaparte's armies. He had been studying as an ecclesiastical student, which was a protected title and would normally have excepted him from military services, but Napoleon had withdrawn the exemption in some dioceses as he required more soldiers.

Two days into his service, John fell ill and required hospitalization. As his troop continued, he stopped in at a church where he prayed. There he met a young man who volunteered to return him to his group, but instead led him deep into the mountains where military deserters met.

John lived with them for one year and two months. He used the name Jerome Vincent and opened a school for the nearby village of Les Noes' children.

John remained in Les Noes and hid when gendarmes came in search of deserters until 1810, when deserters were granted amnesty.

Now free, John returned to Écully and resumed his ecclesiastic studies. He attended a minor seminary, Abbe Balley, in 1812 and was eventually ordained a deacon in June 1815.

He joined his heroes as a priest August 12, 1815 in the Couvent des Minimes de Grenoble. His first Mass was celebrated the next day and he was appointed assistant to Balley in Écully.

Three years later, when Balley passed away, Fr. John Vianney was appointed parish priest of the Ars parish. With help from Catherine Lassagne and Benedicta Lerdet, La Providence, a home for girls, was established in Ars.

When he began his priestly duties, Fr. Vianney realized many were either ignorant or indifferent to religion as a result of the French Revolution. Many danced and drank on Sundays or worked in their fields.

Fr. Vianney spent much time in confession and often delivered homilies against blasphemy and dancing. Finally, if parishioners did not give up dancing, he refused them absolution.

He spent 11 to twelve hours each day working to reconcile people with God. In the summer months, he often worked 16-hour days and refused to retire.

His fame spread until people began to travel to him in 1827. Within thirty years, it is said he received up to 20,000 pilgrims each year.

He was deeply devoted to St. Philomena and erected a chapel and shrine in her honor. When he later became deathly ill but miraculously recovered, he attributed his health to St. Philomena's intercession.

By 1853, Fr. Vianney had attempted to run away from Ars four times, each attempt with the intention of becoming a monk but decided after the final time that it was not to be.

Six years later, he passed away and left behind a legacy of faith and was viewed as the champion of the poor.

St. John Vianney would often say: "Private prayer is like straw scattered here and there: If you set it on fire, it makes a lot of little flames. But gather these straws into a bundle and light them, and you get a mighty fire, rising like a column into the sky; public prayer is like that." 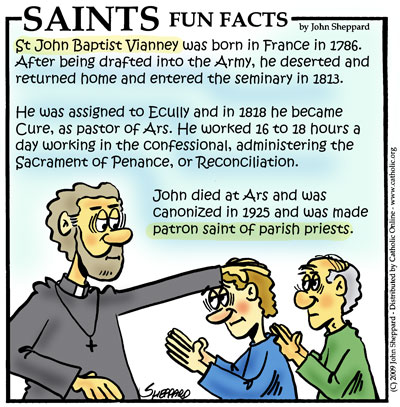