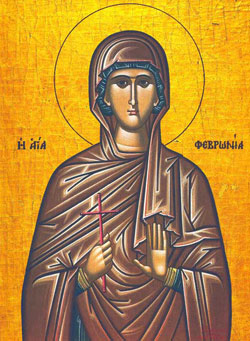 "It must be frankly admitted that the virgin martyr St. Febronia is in all probability a purely fictious personage, but she is venerated by all the churches of the East, including that of Ethiopia, and in the West by such towns as Trani in Apulia and Patti in Sicily." "She is supposed to have suffered at Nisibis in Mesopotamia, somewhere about the year 304, in the persecution under Diocletian. No genuine records of her life and passion are available but the legend attributed to her survives in the form of an attractive romance purporting to have been written by Thomais, a nun of her convent who is said to have witnessed the events she describes."