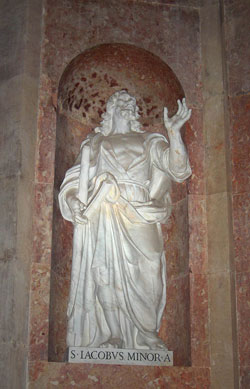 Apostlecalled "the Younger" or "the Just," named in the lists of the disciples given by Matthew, Mark, and Luke and mentioned in the Acts of the Apostles. He was the son of Alpheus and was known as "the Less" merely as a means of distin­guishing him from James the Greater who was older or taller. According to Mark, he stood with the woman Mary and Mary Magdalene at the Crucifixion; he is also called by implication the son of the woman Mary. Little else is known with certainty about him, unless one accepts the view that he is to be identified with St. James, the Brother of the Lord, with whom he is often confused. In liturgical art, he is depicted holding a book or a club. He shares the same feast day as St. Philip.