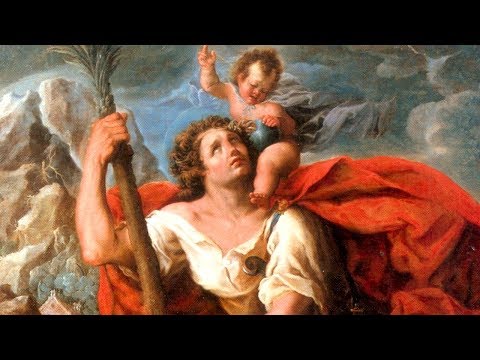 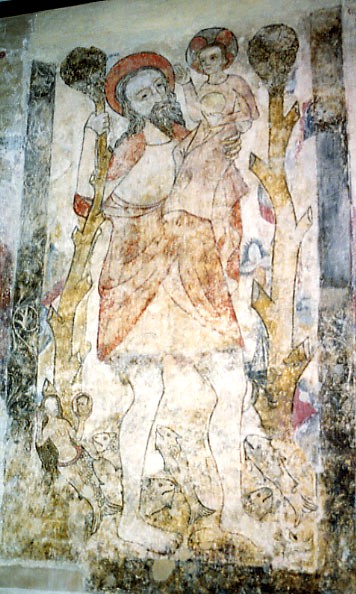 Saint Christopher is one of the most popular Catholic Christian heroes of the Faith. He is a saint, indeed listed as a martyr. He may have also been named Reprobus. He apparently died under the Roman Emperor Decius, in 251 AD. Most Catholics refer to him as Saint Christopher anyway, and his medals and the popular devotions to him are among the most common in Catholic piety.

Other than his listing as a martyr, there are no primary sources referring to St. Christopher, only stories and traditions which have been passed down.

According to these accounts, St. Christopher was extremely tall, and by some accounts he was even a giant! He was surely a man of significant physical stature. But, more importantly, he was a spiritual giant and a sure model and inspiration for the Christian faithful.

Christopher decided one day that he wanted to serve the greatest king he could. He presented himself before his local ruler and entered service, until he noticed the king cross himself at the mention of the devil, revealing that the king believed the Devil to have more power.

St. Christopher then decided to serve the Devil. During his search, he encountered a band of thieves, whose leader referred to himself as the Devil. But when this leader avoided a Christian cross out of fear, St. Christopher learned there was someone even more powerful than the Devil.

Other legends state that St. Christopher traveled after this experience and evangelized thousands of people. Arriving in Lycia in Asia Minor, and witnessing to Christians there who were being martyred. At that time, St. Christopher was detained and ordered to offer a sacrifice to the emperor. When he refused, it was decided to attempt to persuade him with money and women. Two women were sent to seduce him, but instead he converted them to Christianity.

After this, it was decided to have him killed, but various attempts to assassinate him failed. Eventually, he was arrested and beheaded.

The name "Christopher" means Christ-bearer, and may allude to the legend of the man carrying the Christ Child across the river. Saint Christopher also did not become popularized in the Church until the 7th century, about three centuries after his supposed death. We know of his popularity because around the 7th century, churches and monasteries began to be named after him. This adds credibility to the supposition that St. Christopher was merely a legendary figure and not a real person.

There is also speculation that St. Christopher could have also been confused with St. Menas, an Egyptian saint. Both Christopher and Menas are referred to as "Christ bearers" and are patrons of travelers.

St. Christopher is the patron saint of travelers and of children. His feast day is July 25. Because he is not officially recognized by the Church, he has no date of beatification or canonization. Despite these technicalities, it is widely thought that he was real and that he continues to intercede on behalf of Christians, especially children, today.