Feastday: November 24
Patron: of Patron Saint of the Diocese of Cloyne and of its cathedral in Cobh.
Birth: 522
Death: 600 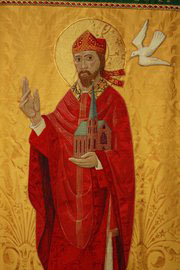 St. Colman of Cloyne - Feast day - November 24th He was born in Munster, Ireland, son of Lenin. He became a poet and later, royal bard at Cashel. He was baptized by St. Brendan when he was fifty years old with the name Colman. He was ordained, and was reputed to be St. Columba's teacher. He became the first bishop of Cloyne, of which he is patron, in eastern Cork.