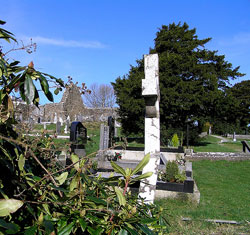 Irish abbot, a disciple of St. Columba. He was born in Bregia, Leinster, Ire­land. Tradition credits him with founding a church at Innisfallen and a monastery there as well. After a stay in Clonmore, Finian Lobhar became abbot of Swords Abbey near Dublin. He may have returned to Clonmore in his later years and was called Lobhar, "the Leper," but apparently did not have that disease. He acquired the name when he contracted leprosy from a young boy whom he cured of the disease.