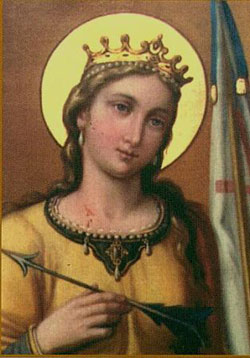 According to a legend that appeared in the tenth century, Ursula was the daughter of a Christian king in Britain and was granted a three year postponement of a marriage she did not wish, to a pagan prince. With ten ladies in waiting, each attended by a thousand maidens, she embarked on a voyage across the North sea, sailed up the Rhine to Basle, Switzerland, and then went to Rome. On their way back, they were all massacred by pagan Huns at Cologne in about 451 when Ursula refused to marry their chieftain. According to another legend, Amorica was settled by British colonizers and soldiers after Emporer Magnus Clemens Maximus conquered Britain and Gaul in 383. The ruler of the settlers, Cynan Meiriadog, called on King Dionotus of Cornwall for wives for the settlers, whereupon Dionotus sent his daughter Ursula, who was to marry Cynan, with eleven thousand maidens and sixty thousand common women. Their fleet was shipwrecked and all the women were enslaved or murdered. The legends are pious fictions, but what is true is that one Clematius, a senator, rebuilt a basilica in Cologne that had originally been built, probably at the beginning of the fourth century, to honor a group of virgins who had been martyred at Cologne. They were evidently venerated enough to have had a church built in their honor, but who they were and how many of them there were, are unknown. From these meager facts, the legend of Ursula grew and developed. Feast day October 21.