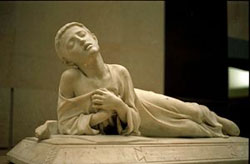 Tarsicius was an acolite or perhaps a deacon at Rome. He was accosted and beaten to death on the Appian Way by a mob while carrying the Eucharist to some Christians in prison. The incident is included in Cardinal Wiseman's novel "Fabiola", and Pope Damasus wrote a poem about it. Tarsicius is the patron of first communicants and his feast day is August 15