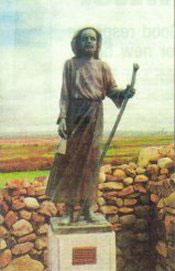 Senan was born of Christian parents at Munster, Ireland. He was a soldier for a time and then became a monk under Abbot Cassidus, who sent him to Abbot St. Natalis at Kilmanagh in Ossory. Senan became known for his holiness and miracles and attracted great crowds to his sermons. He made a journey to Rome, meeting St. David on the way back. He built several churches and monasteries, and then settled on Scattery Island, where he built a monastery that soon became famous. He died at Killeochailli on the way back from a visit to St. Cassidus monastery. His feast day is March 8.