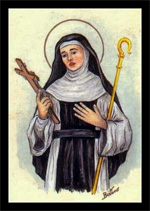 A Benedictine abbess who was a gifted mystic. She had her first vision in 1152 and was known for ecstasies, prophecies, and diabolical visitations. She became abbess in 1157 . Her cult was never formalized, but she is listed as a saint in the Roman Martyrology. Her brother, Ethbert, a Benedictine abbot, wrote her biography and recorded her visions in three books.