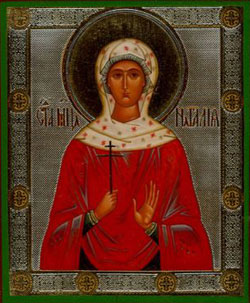 Not much is known about St. Natalie, except that she was martyred for her Faith with her husband Aurelius. According to his biography by St. Eulogius of Toledo, Aurelius was the son of a Moor and a Spanish woman, and was orphaned as a child. He was secretly raised a Christian by his aunt during the Moorish persecution of Christians. He married a half Moorish woman, Sabigotho, who took the name Natalie when he converted her to Christianity. They were both beheaded for practicing their religion openly together with George, a monk from Jerusalem whom Aurelius had befriended. Their feast day is July 27th.