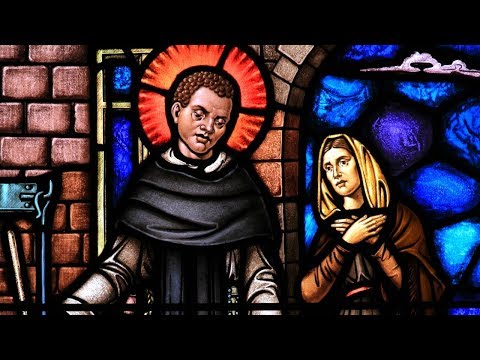 St. Martin de Porres was born in Lima, Peru on December 9, 1579. Martin was the illegitimate son to a Spanish gentlemen and a freed slave from Panama, of African or possibly Native American descent. At a young age, Martin's father abandoned him, his mother and his younger sister, leaving Martin to grow up in deep poverty. After spending just two years in primary school, Martin was placed with a barber/surgeon where he would learn to cut hair and the medical arts.

As Martin grew older, he experienced a great deal of ridicule for being of mixed-race. In Peru, by law, all descendants of African or Indians were not allowed to become full members of religious orders. Martin, who spent long hours in prayer, found his only way into the community he longed for was to ask the Dominicans of Holy Rosary Priory in Lima to accept him as a volunteer who performed the most menial tasks in the monastery. In return, he would be allowed to wear the habit and live within the religious community. When Martin was 15, he asked for admission into the Dominican Convent of the Rosary in Lima and was received as a servant boy and eventually was moved up to the church officer in charge of distributing money to deserving poor.

During his time in the Convent, Martin took on his old trades of barbering and healing. He also worked in the kitchen, did laundry and cleaned. After eight more years with the Holy Rosary, Martin was granted the privilege to take his vows as a member of the Third Order of Saint Dominic by the prior Juan de Lorenzana who decided to disregard the law restricting Martin based on race.

However, not all of the members in the Holy Rosary were as open-minded as Lorenzana; Martin was called horrible names and mocked for being illegitimate and descending from slaves.

Martin grew to become a Dominican lay brother in 1603 at the age of 24. Ten years later, after he had been presented with the religious habit of a lay brother, Martin was assigned to the infirmary where he would remain in charge until his death. He became known for encompassing the virtues need to carefully and patiently care for the sick, even in the most difficult situations.

Martin was praised for his unconditional care of all people, regardless of race or wealth. He took care of everyone from the Spanish nobles to the African slaves. Martin didn't care if the person was diseased or dirty, he would welcome them into his own home.

Martin's life reflected his great love for God and all of God's gifts. It is said he had many extraordinary abilities, including aerial flights, bilocation, instant cures, miraculous knowledge, spiritual knowledge and an excellent relationship with animals. Martin also founded an orphanage for abandoned children and slaves and is known for raising dowry for young girls in short amounts of time.

During an epidemic in Lima, many of the friars in the Convent of the Rosary became very ill. Locked away in a distant section of the convent, they were kept away from the professed. However, on more than one occasion, Martin passed through the locked doors to care for the sick. However, he became disciplined for not following the rules of the Convent, but after replying, "Forgive my error, and please instruct me, for I did not know that the precept of obedience took precedence over that of charity," he was given full liberty to follow his heart in mercy.

Martin was great friends with both St. Juan Macías, a fellow Dominican lay brother, and St. Rose of Lima, a lay Dominican.

In January of 1639, when Martin was 60-years-old, he became very ill with chills, fevers and tremors causing him agonizing pain. He would experience almost a year full of illness until he passed away on November 3, 1639.

By the time he died, he was widely known and accepted. Talks of his miracles in medicine and caring for the sick were everywhere. After his death, the miracles received when he was invoked in such greatness that when he was exhumed 25 years later, his body exhaled a splendid fragrance and he was still intact.

He has become the patron saint of people of mixed race, innkeepers, barbers, public health workers and more. His feast day is November 3.