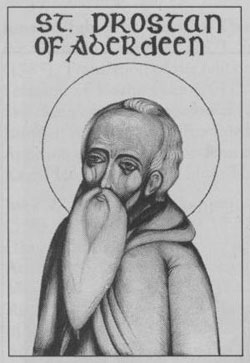 Irish born abbot, a disciple of St. Columba. Drostan was a member of the royal Cosgrach family of Ireland. He was named the first abbot of Deer in Aberdeenshire, Scotland, and is considered an apostle to Scotland. He ended his days near Glenesk, Angus, and a well is associated with him at Aberdour.