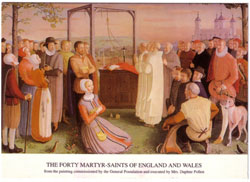 John Roche was one of the London martyrs of 1588. Blessed Margaret Ward was a gentle woman born at Congleton in Cheshire, in the service of another gentle woman, Whitall, in London. She had visited in the Bridewell prison, Mr. Richard Watson, a secular priest; to him she smuggled a rope, but in making use of it to escape, Watson had fallen and broken an arm and a leg. He was gotten away by Margaret's young Irish serving-man, John Roche, who, to assist the priest's escape, changed clothes with him and so, was himself arrested. When charged, both Blessed Margaret and Blessed John refused to disclose Mr. Watson's whereabouts. They were offered their liberty if they would ask the Queen's pardon and promise to go to church; to which they replied that they had done nothing that could reasonably offend her Majesty, and that it was against their conscience to attend a protestant church. So they were condemned. These martyrs, who suffered with such firm constancy and patience, were forbidden to speak to the people from the scaffold because their persecutors were afraid of the impression they would make; "but the very death of so many saint-like innocent men (whose lives were unimpeachable), and of several young gentlemen, which they endured with so much joy, strongly pleaded for the cause for which they died." Their feast day is August 28.