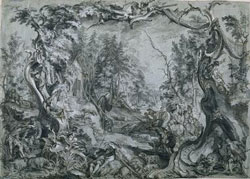 Monk and companion of St. Columbanus, also called Deicolus, Desle, Dichul, Deel, Delle, or Deille. He was an elder brother of St. Gall, born in Leinster, Ireland. As one of St. Columbanus' twelve disciples, Deicola accompanied him to France in 567 and worked with him in Austrasia and in Burgundy, France. In 610, St. Columbanus was exiled by Thierry II. Deicola, too old to accompany him, founded the monastery of Lure in the Vosges, France, and lived there as a hermit.