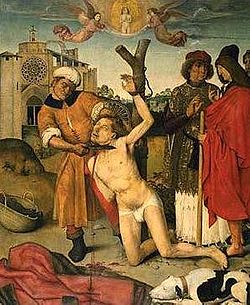 A martyr of Spain, also called Cucufate, Cugat, Guinefort, or Qaqophas. He was born into a noble family in Scillis, Africa. While going to Spain, he was martyred near Barcelona. Prudentius composed verse in his honor, and the Benedictine abbey of St. Cugat de Valles stands on the site of his martyrdom. Cucuphas is also venerated in Paris, where some of his relics are enshrined.