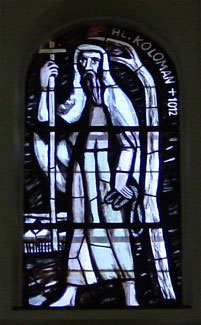 An Irish or Scottish pilgrim who was martyred in Austria while on the way to the Holy Land. Tortured and hanged as a spy, he edified everyone with his courage. His body remained preserved, and miracles were reported at his grave. The Austrians realized that Colman was a holy man, put to death by mistake. He became a patron saint of Austria.