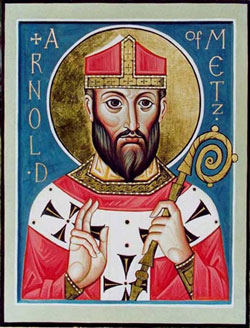 Bishop and member of the court of the Frankish king Theodebert II of Austrasia, sometimes called Arnuiph or Arnulf of Metz. A noble, Arnulf married Doda, and their son was Ansegisel. Ansegisel married Beggia, the daughter of Pepin of Landen, starting the Carolingian dynasty of France. Doda became a nun, and Arnulf made plans to enter a monastery but was named the bishop of Nletz around 616. He continued his court services, making Clotaire of Neustria the king of Austrasia. He also served as counselor to Dagobert, King Clotaire's son. In 626, Arnulf retired to a hermitage at Remiremont, France.