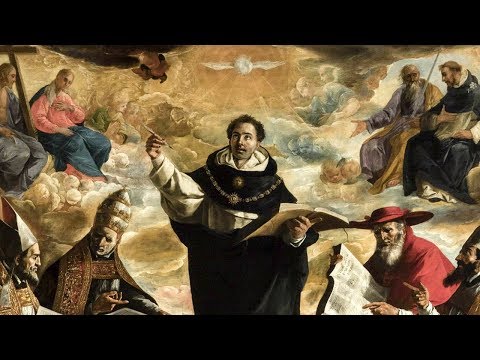 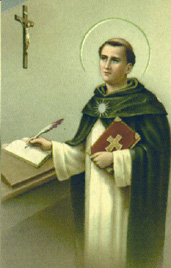 Thomas is believed to have been born in the castle of Roccasecca in the old county of the Kingdom of Sicily, which is now known as the Lazio region of Italy, in 1225. His parents were well-off, but as the youngest son Thomas was expected to enter the monastery.

At 5-years-old, Thomas began his education at Monte Cassino, where he remained until the military conflict between Emperor Frederick II and Pope Gregory IX reached the abbey. He was then transferred and enrolled at the studium generale in Naples.

It is believed that Thomas was introduced to his philosophical influences - Aristotle, Averroes, and Maimonides - at the university, where he also met John of St. Julian, a Dominican preacher, who influenced him to join the recently founded Dominican Order.

When Thomas' family learned of his decision, his mother Theodora arranged for him to be moved to Paris. When Thomas was travelling to Rome, his brothers captured him and returned him to their parents at the castle of Monte San Giovanni Campano.

In an effort to change Thomas' mind, two of his brothers hired a prostitute to seduce him, but legends claim Thomas drove her off with a fire iron. That night, two angels appeared to him in a dream and strengthened his resolve to remain celibate.

When Theodora realized she could not sway her son, she tried to preserve the family name by arranging for his escape through a window. She believed a secret escape was better than appearing to accept his decision.

Following his escape in 1244, Thomas turned to Naples, then to Rome and met the Master General of the Dominical Order, Johannes von Wildeshausen.

The next year, Thomas went to study at the Faculty of the Arts at the University of Paris, where he is believed to have met Dominican scholar Albertus Mangus, the Chair of Theology at the College of St. James.

In 1248, Thomas chose to follow Mangus to the new studium generale at Cologne rather than accepting Pope Innocent IV's offer to appoint him abbot of Monte Cassino as a Dominican. Though Thomas hesitated, when they reached the university, Mangus appointed him magister studentium.

Thomas was quiet and seldom spoke at the university, leading other students to believe he was mentally delayed, but Mangus prophetically said, "You call him the dumb ox, but in his teaching, he will one day produce such a bellowing that it will be heard throughout the world."

Following the conclusion of his education, Thomas taught in Cologne as an apprentice professor and instructed students on the books of the Old Testament. It was during this time he wrote Expositio super Isaiam ad litteram, Postilla super Ieremiam, and Postilla super Threnos.

In 1252, Thomas returned to Paris to earn his master's degree in theology. As an apprentice professor, he lectured on the Bible and devoted his final three years of his education to Peter Lombard's Sentences.

Thomas composed a commentary on Sentences, titled Scriptum super libros Sententiarium and wrote De ente et essentia.
The spring of 1256 saw Thomas appointed regent master in theology at Paris, and one of his first works after assuming the office was Contra impugnantes Dei cultum et religionem, in defense of mendicant orders, which William of Saint-Amour had been attacking.

In 1259, Thomas completed his first regency and returned to Naples, where he was appointed general preacher. In September 1261, he was asked to lecture in Orvieto, and during his stay he finished Summa contra Gentiles, as well as Catena aurea, and Contra errores graecorum.

In 1265, Thomas was summoned to Rome to serve as the papal theologian and was later ordered by the Dominican Chapter of Agnani to teach at the studium conventuale, which was the first school to teach the full range of philosophical subjects of both moral and natural natures.

While teaching, Thomas wrote his most famous work, Summa theologiae, which he believed was particularly useful to beginning students "because a doctor of Catholic truth ought not only to teach the proficient, but to him pertains also to instruct beginners."

He continued to write and released several more books until 1268, when he was called to Paris for a second teaching regency. He was named regent master again and stayed until 1272. During this time, he wrote De virtutibus and De aeternitate mundi.

At the conclusion of his regency, the Dominicans called Thomas to establish a university wherever he wanted with a staff of whomever he wished. He established the university in Naples and took the regent master post. In 1273 Thomas was seen by the sacristan Domenic of Caserta to be crying and levitating in prayer before an icon of the crucified Christ at the Dominican convent of Naples, in the Chapel of Saint Nicholas.

During this prayer, Christ is said to have told him, "You have written well of me, Thomas. What reward would you have for your labor?"

Thomas replied, "Nothing but you, Lord."

Following this exchange, something happened but Thomas never wrote or spoke of it. He abandoned his routine and, when begged to return to work, replied, "I cannot, because all that I have written seems like straw to me."

In May of 1274, Thomas was called to the Second Council of Lyon, where his works for Pope Urban IV would be presented. While journeying to the meeting, Thomas hit his head on the branch of a fallen tree and fell ill. He was escorted to Monte Cassino to recover, then he set out again.

Unfortunately, he became ill once again and stopped at the Cistercian Fossanova Abbey, where the monks cared for him for several days.

He received his last rites and prayed, "I receive Thee, ransom of my soul. For love of Thee have I studied and kept vigil, toiled, preached and taught..."

Thomas died on March 7, 1274 during a commentary on the Song of Songs. Thomas' remains were placed in the Church of the Jacobins in Toulouse on January 28, 1369.

It is not known who beatified Thomas, but on July 18, 1323, Pope John XXII canonized him.

His original feast day was March 7, the day of his death, but because the date often falls within Lent, in 1969, a revision of the Roman Calendar changed his feast day to January 28, the date his relics were moved to Toulouse. Pope Pius V declared Saint Thomas a doctor of the church, saying Thomas was "the most brilliant light of the Church."
Saint Thomas' remains were moved to the Basilique de Sant-Sernin, Toulouse between 1789 and 1974. They were then returned to the Church of the Jacobins.

In the 16th century, the university in Paris, that Thomas often taught at, was renamed the College of Saint Thomas, and in the 20th century it was relocated to the convent of Saints Dominic and Sixtus before being transformed into the Pontifical University of Saint Thomas Aquinas.

Saint Thomas' comments and philosophical writings are still debated today, and his aesthetic theories, such as the concept of claritas, deeply influenced the literary writings of James Joyce and Italian semiotician Umberto Eco. Saint Thomas is often depicted with an open book or writing with a quill.

A Student's Prayer by St. Thomas

Come, Holy Spirit, Divine Creator, true source of light and fountain of wisdom! Pour forth your brilliance upon my dense intellect, dissipate the darkness which covers me, that of sin and of ignorance.

Grant me a penetrating mind to understand, a retentive memory, method and ease in learning, the lucidity to comprehend, and abundant grace in expressing myself. Guide the beginning of my work, direct its progress, and bring it to successful completion.

This I ask through Jesus Christ, true God and true man, living and reigning with You and the Father, forever and ever. 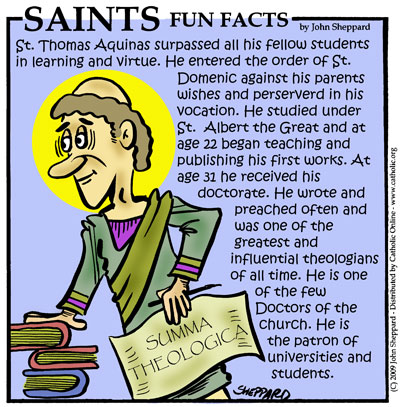