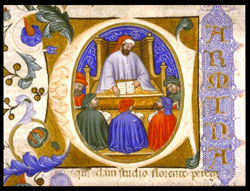 Roman philosopher, theologian, and statesman, one of the last notable philosophers in the classical Roman tradition. Known, in full as Anicius Manlius Torquatus Severinus Boethius, he was born to the ancient noble family of Rome, the Anicii, and studied at Athens and Alexandria, receiving a deep classical education. In 510, he was named a consul under the Ostrogothic king Theodoric and became his magister officiorurn (master of offices) in 520, a post which demonstrated Theodoric’s deep trust and respect for Boethius’ abilities. However, relations between them soon deteriorated, as Boethius was staunchly orthodox in his Christianity while Theodoric was a devoted Arian. When Boethius defended the ex-consul Albinus on charges of treason, Theodoric had him seized, condemned, and put to death. A brilliant philosopher and statesman, Roethius authored translations of Aristotle, the Isagoge by Porphyry, and a Commentary on the Topics of Cicero. He also authored treatises on the Holy Trinity (De Sancti Trinitate) and orthodox Christology, and a biography of the Christian monk and writer Cassiodorus (d. 580). His most famous work, De Consolatione Philosophiac (The Consolation of Philosophy), was written while he was in prison. In it, he proposed that the study of philosophy made attainable knowledge of virtue and God. He is considered a martyr for the Catholic faith and was canonized under the name St. Severinus.