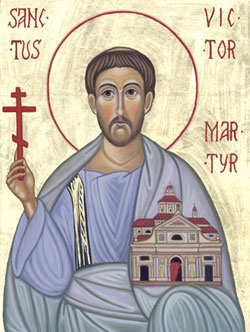 Victor Maurus was a native of Mauretania. He was born in the third century, and was called Maurus to distinguish him from other confessors named Victor. He is believed to have been a soldier in the Praetorian guard. Victor was a Christian from his youth, but it was not until he was an elderly man that he was arrested for the Faith. After severe tortures, including being basted with molten lead, he was decapitated under Maximian in Milan around the year 303. Later a church was erected over his grave. According to St. Gregory of Tours, many miracles occurred at the shrine. In 1576, at the request of St. Charles of Borromeo, Victor's relics were transferred to a new church in Milan established by the Olivetan monks. The church still bears St. Victor's name today. After a life of adherence to the Faith during perilous times, St. Victor Maurus was taken prisoner and tortured as an old man. Despite age, infirmity, and declining health, he remained steadfast in the Faith, gladly giving up his life for the Kingdom. His generous response to the call to martyrdom stands as a solemn sign to the modern church of the folly of the things of this world. His feast day is May 8th.