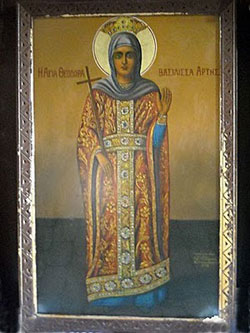 There is a pious fiction according to which Theodora, a beautiful Christian girl of Alexandria, was sentenced to a brothel during the persecution of Christians under Emperor Diocletian when she refused to sacrifice to the gods. She fell dead when she was rescued by Didymus; when Didymus' act was discovered, he was beheaded. Her feast day is April 28th.