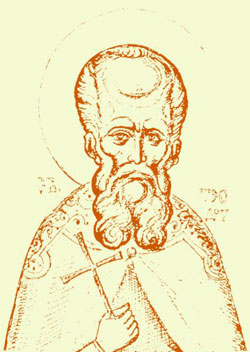 Martyr with Thecusa, Alexandra, Claudia, faina (Phaina), Euphrasia, Matrona, and Julitta during the persecutions of Emperor Diocletian. Theodotus was an innkeeper at Ancyra, Galatia (modern Turkey), who gave burial to seven virgins after their martyrdom for refusing to wear pagan priestess robes and take part in a pagan festival. Theodotus was himself betrayed by an apostate and was martyred. In turn, his remains were gathered up by a Christian and sent to Malus where they received a proper burial and were enshrined in a chapel. This martyrdom is suspect and is believed to be a morality tale.