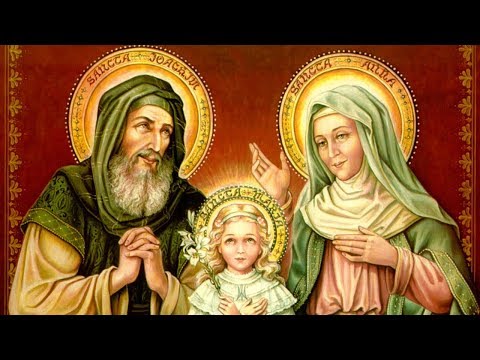 Saints Joachim (sometimes spelled "Joaquin," pronounced "wal-keem") and Anne, are the parents of the Virgin Mary. There are no mentions of them in the Bible or Gospels, what we know comes from Catholic legend and the Gospel of James, which is an unsanctioned, apocryphal writing form the second century AD. We do know from scholarship that the Gospel of James was not written by James, the Brother of Jesus, despite its claim to be so authored.

Even the early Church fathers expressed skepticism about the Gospel of James in their writings. There are about 150 copies of the ancient manuscript which often have different titles, but tell the same story, that Mary was promised to Joachim and Anne by an angel, was consecrated to God, and she remained a virgin all her life.

Naturally, there is plenty of room for scholarly debate about these saints. We have no true primary sources that prove they even existed, but certainly we can agree that Mary had parents. Likewise, we can agree that.

Mary had good, faithful parents who raised her with a love and devotion to God like none other except Jesus Christ Himself.

Joachim and Anne serve as role models for parents and both deserve to be honored and emulated for their devotion to God and Our Lady Mary, the Mother of God.

Click to Save 25% Now
Continue reading about Sts. Joachim and Anne