St. Wenceslaus I, Duke of Bohemia 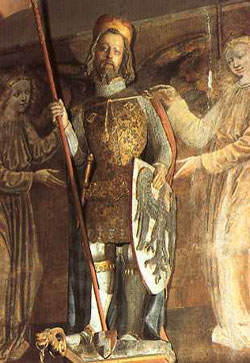 Patron saint of Bohemia, parts of Czech Republic, and duke of Bohemia frorn 924-929. Also called Wenceslas, he was born near Prague and raised by his grandmother, St. Ludmilla, until her murder by his mother, the pagan Drahomira.

Wenceslaus's mother assumed the regency over Bohemia about 920 after her husband's death, but her rule was so arbitrary and cruel in Wenceslaus' name that he was compelled on behalf of his subjects to overthrow her and assume power for himself in 924 or 925.

A devout Christian, he proved a gifted ruler and a genuine friend of the Church.

German missionaries were encouraged, churches were built, and Wenceslaus perhaps took a personal vow of poverty. Unfortunately, domestic events proved fatal, for in 929 the German king Heinrich I the Fowler  (r. 919-936) invaded Bohemia and forced Wenceslaus to make an act of submission.

This defeat, combined with his pro-Christian policies, led a group of non-Christian nobles to conspire against him. On September 28, 935, a group of knights under the leadership of Wenceslaus' brother, Boreslav, assassinated the saint on the doorstep of a church.

Virtually from the moment of his death, Wenceslaus was considered a martyr and venerated as a saint.

Miracles were reported at his tomb, and his remains were translated to the church of St. Vitus in Prague which became a major pilgrimage site.

The feast has been celebrated at least since 985 in Bohemia, and he is best known from the Christmas carol "Good King Wenceslaus."

Continue reading about St. Wenceslaus I, Duke of Bohemia