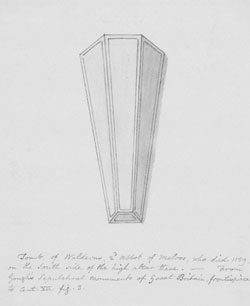 Cistercian abbot, also known as Walthen and Waldef. The son of Simon, earl of lluntingdon, England, he was born circa 1100, and was raised at the court ofthe Scottish king alter his mother, Maud, wed King David I of Scotland (r. 1124-1153) following the death ofher first husband. While at court, Waltheof came under the influence of St. Adred, who was master of the royal household. Drawn toward the religious life, he entered the Augustinian Canons in Yorkshire and was elected abbot of Kirkham after a vision of the Christ Child. Waltheofdesired a more austere life and so joined the Cistercians at Wardon, Bedfordshire, and then became abbot ofMelrose which had been rebuilt recently by his stepfather. In later years, he declined the office of archbishop of St. Andrews. He was renowned for his immense charity to the poor, personal holiness, and deep austerity.