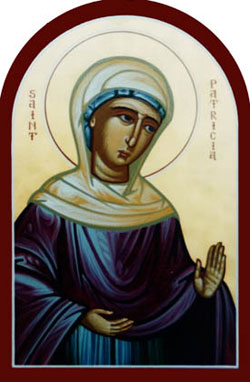 St. Patricia according to legend, was of a noble and perhaps royal family in Constantinople who fled to Italy to escape marriage and became a virgin consecrated to God in Rome. She returned to constantinople, distributed her wealth to the poor, and then went back to Italy;, where she died soon after, at Naples. She is a patron of Naples, and like St. Januarius there, a vial believed to be filled with her blood reportedly liquefies thirteen hundred years after her death. Feast Aug. 25