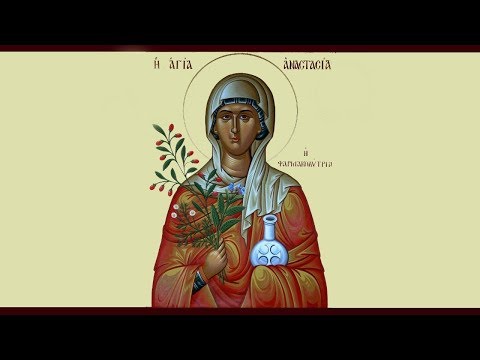 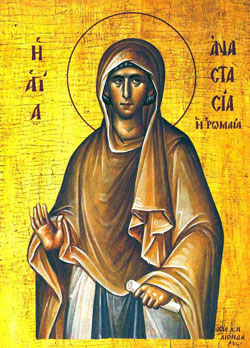 St. Anastasia, also known as Anastasia of Sirmium and Anastasia the Pharmakolytria or "Deliverer from Potions," is a Christian saint and martyr who suffered for Christ during the time of Diocletian's Christian persecutions.

She is one of the seven women commemorated by name in the Canon of the Mass.

Following the death of her mother, Anastasia's father gave her in marriage to the pagan Publius, but she preserved her virginity.

During the persecutions of Diocletian, Anastasia visited the prisons and cared for the confessors of faith. She would feed, doctor and ransomed suffering captives. Anastasia's servant informed Publius; he locked her up and beat her.

Anastasia began secretly corresponding with her adviser, St. Chrysogonus, who had gone to Aquileia. He told her to be brave, be patient and accept the Lord's will.

After the death of her husband while he was on embassy to Persia, Anastasia distributed her property to those less fortunate and suffering.

After his death, Chrysogonus appeared to Zoilus, a presbyter who found his relics and foretold the martyrdoms of Ss. Agape, Chione and Irene. He asked Zoilus to send Anastasia to the three sisters as encouragement.

Nine days later, Anastasia visited the sisters just before they were tortured. After they were martyred, Anastasia buried them.

Anastasia spent her time traveling from city to city caring for Christian prisoners. She healed their wounds and relieved their pain. She was given the title "Deliverer from Potions," because she would often heal many from the effects of poisons and potions.

Anastasia was arrested in Illyricum and taken to the prefect of the district for being Christian. He tried to persuade her to deny her faith and threatened her with torture. Anastasia could not be swayed, so she was given to the pagan priest Ulpian in Rome.

He presented her with the choice between riches or suffering, luxuries or torture devices. She chose torture.

He gave her three days to reconsider. Enamored by her beauty, Ulpian decided he would defile her purity. However, once he went to touch her he was struck blind and his head burst into extreme pain. On his way to his pagan temple, he fell and died.

St. Anastasia, now free, set out to care for imprisoned Christians, along with Theodota, a pious young widow and faithful helper. After Theodota was martyred, Anastasia was caught once again.

She was ordered death by starvation and was starved for 60 days. But Anastasia was not harmed. It is said the martyred Theodota visited her and fed her during this time.

Following yet another escape, Anastasia was taken to the island of Palmaria. She was staked to the ground with her arms and legs stretched out and burned alive.

St. Anastasia's relics were taken to Constantinople, where a church was dedicated to her. Later, a hand and her head were transferred to the Monastery of St. Anastasia near Mount Athos.

The entire account of St. Anastasia's life and tragedies are believed to be purely legendary. All that is certain is a martyr named Anastasia died for her faith in Sirmium and her memory is sacred.

St. Anastasia is the patron saint of martyrs, weavers, and those suffering from poison. Her feast day is celebrated on December 25.