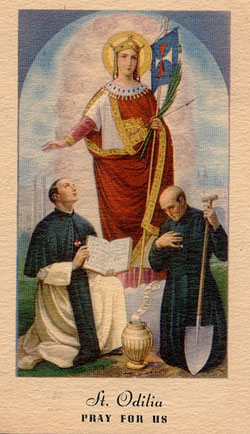 About the year 300, Saint Odilia and ten other virgins set out from England on a pilgrimage to the East. By accident or plan the ship in which they sailed went up the Rhine. They were captured by some soldiers and taken to Cologne. There the young women were killed in defense of their Christian faith and their purity. St. Odilia's future role as the Patroness of the Order of the Holy Cross is pictured by the Crosier standard and her motto, "I have chosen the cross."

The Paris house of the Crosiers is very important in the history of Saint Odilia. It was here that she appeared to John of Eppa with her special message. The Crosier community was founded in Paris in 1258. King St. Louis was particularly interested in the Order of the Holy Cross because of his great devotion to the Passion of Christ. Construction of the Church was begun about the year 1268.

In the spring of 1287, Saint Odilia appeared three times to Brother John of Eppa, a Crosier lay brother, in the Paris monastery. She told him that God had commanded her to be the Protectress of the Order and where her relics were to be found. Brother John and his companion, Father Louis, journeyed to Cologne and the garden of Arnulph where the relics were buried.

Saint Odilia's relics are found and taken to Huy

After overcoming the skepticism of Arnulph, the two Crosiers began to dig around the pear tree in his garden where Odilia said the relics were to be found. Three urns were unearthed containing the remains of Odilia, Ida and Emma. Many cures took place through the intercession of Saint Odilia. The newly-discovered relics were taken to the mother house of the Crosiers at Huy, Belgium, with great solemnity.

Persecuted by the world, The Order loses the relics

The Order suffered much during the Protestant Revolt, the French Revolution and the Napoleonic wars. The Mother house at Huy was destroyed but a priest managed to escape with the relics of St. Odilia. They were to remain in a parish church in Kerniel, Belgium, for many years.

The relics of Saint Odilia are returned to the Order

In 1949, the relics of Saint Odilia were returned from the parish church at Kerniel where they had been since the French Revolution, to the care of the Order of the Holy Cross. They were taken in solemn procession from Kermiel to the Crosier monastery at Diest, Belgium as shown in these windows. In 1952 a major relic of Saint Odilia was brought to Onamia, Minnesota. A shrine in honor of the Patroness of the Order and the Patroness of the blind and afflicted was then set up in the seminary chapel.

It was a long, long time ago, in the fourth century, that Odilia, the daughter of a powerful ruler of Britain, went to her martyrdom at Cologne, Germany, together with Ursula and a group of other virgins. These virgins were seeking a place where they might practice their faith in peace and quiet, but at the gates of Cologne they were met by fierce and cruel barbarians. The life-story of these valiant women ends here. They chose death.

The work of the Saints in heaven, though sometimes unseen and unheralded, is richer by far than it was on earth. So it was with Saint Odilia. About eight hundred years later, in 1287, she appeared to John Novelan, a lay brother of the Crosier Order in Paris, and told him she had been appointed by God to be the Patron Saint and Protectress of the members of the Order of the Holy Cross (now commonly called Crosier Fathers). She informed him also that her relics were to be found in an orchard in Cologne and begged him to get permission to unearth them. He did ask permission of his superior but was refused. Saint Odilia was persistent; she appeared twice more. Finally the Prior consented and commanded a priest of the Order to accompany the brother.

When these two reached Cologne, they had little trouble finding the relics. Joyfully they informed the Archbishop, who came personally to witness the findings.

Saint Odilia had instructed Brother John that her relics were to be taken to the Motherhouse of the Order at Huy in Belgium. Both at Cologne and on the way to Huy various cures took place, of blindness, of paralysis and other bodily infirmities.

In 1797, at the time of the French Revolution, the monastery at Huy was totally destroyed; and although the relics were saved they were lost to the Order. Fortunately, just recently, in 1949, Saint Odilia "came back home". Her relics were returned to the order, and a large portion of one of her bones was brought to Onamia, Minnesota, and now rests in her Shrine here. It can be viewed by entering the Shrine, where it is encased in a marble reliquary. Saint Odilia has promised to shower a stream of graces upon the Crosier Fathers and upon all those who invoke her aid in their hour of need. For centuries it has been the practice in the Crosier Order to bless water in honor of Saint Odilia, dipping her relic in it and asking God to give it "power against all diseases and bodily infirmities". Many are the cures, especially of diseases of the eyes, obtained through her intercession.

Thousands of people, from every state, send in their petitions to be included in the novenas, and many letters of thanks are received from people whose favors have been granted. Apparently Saint Odilia is kept busy in heaven showering graces and blessings upon her friends on earth.

In July of each year, the Crosier Fathers and Brothers offer a one-day healing retreat, focusing on Saint Odilia, Patroness of the Blind and Afflicted and Patroness of the Crosiers. This retreat is held at the National Shrine of Saint. Odilia in Onamia, Minnesota.

Novenas in honor of Saint Odilia are made at Crosier Monastery twice a month, beginning on the 5th and 17th of each month, and the national novena is held from July 10-July 18.


This Information was Provided By Crosier Fathers and Brothers 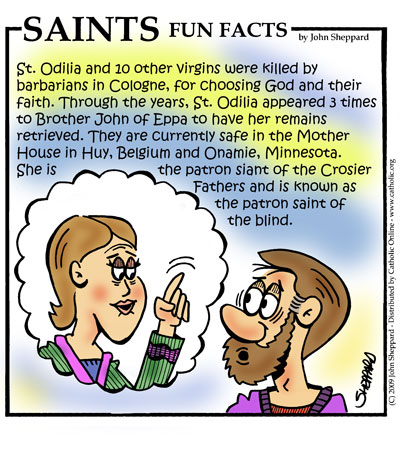