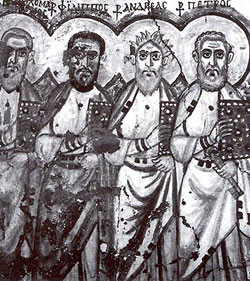 Egyptian hermit, founder, and miracle worker. Apollo was born in Egypt and spent forty years in the desert region around Thebes. He then founded a community of monks in Hermopol, Egypt, ultimately numbering five hundred, and became their abbot. Apollo was eighty years old when he made this foundation. He was noted for his miracles.