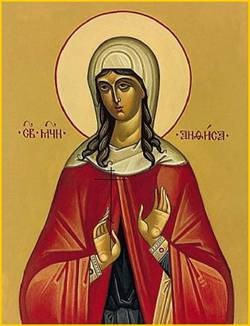 Abbess tortured by the Byzantine Emperor Constantine V. Anthusa was originally a hermitess, becoming abbess of the convent near Constantinople. Because of her veneration of sacred images, she was arrested by the emperor, who, as an ardent iconoclast, opposed such sacramentals. Anthusa was tortured severely until the empress intervened and secured her release.