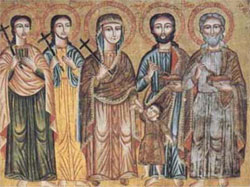 Priest and martyr of Rome, Anthimus is not well known. He is reported to have had the Church in Rome, converting many. One of his converts, a Roman prefect, brought Anthimus to the attention of the authorities. He was arrested and condemned to death by drowning. Miraculously saved, Anthimus escaped briefly but was recaptured and beheaded.